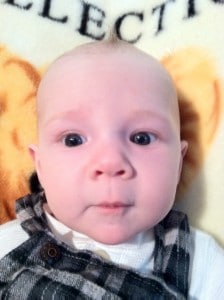 Infants need not only love and emotional nurturing and a healthy physical environment, but also an environment which promotes their very real need to learn. The Montessori Teaching Method provides a basis for individualized learning activities, appropriate for even the earliest stages of a child’s development.

The daily needs of the infant, such as diapering, feeding and bathing are the optimal times for interaction, cooperation, intimacy and mutual enjoyment. Using theses times for social learning experiences encourage full participation of the infant and the caregiver. These times become the opportunity for much communication and for nurturing. As the infant is “refueled” by such attentive, caring interaction, he is ready to explore the world around him with minimal intervention from adults.

The purpose of the Infant Development Program at the Montessori East County Preschool is to encourage, assist, and protect the normal development of each child. The primary goals include development of movement and independence. Children in the Program will flourish in prepared environments which respect, support and respond to their basic needs for independence, exploration and the building of trust and self-esteem.

We believe that any kind of group child care will not work without the co-operation between care givers and the parents. Parental involvement is stressed; parents know their child better than anyone else. Parents and caregivers must feel comfortable in exchanging knowledge and experience about the child.

During the early years of life, Dr. Maria Montessori felt that “the first thing the child’s education demands is the provision of an environment in which he or she can develop the powers given by nature”. Quite literally, the school environment IS the curriculum.

The structure of the curriculum is based on five developmental areas: Sensory and Perceptual, Physical and Motor, Self-help Skills, Language, and Social and Emotional. Dr. Maria Montessori emphasized the need for a rich environment. While providing a structured, and thus familiar environment, the needs of individual children are met.

The young child absorbs the world around him or her through the five senses, and a rich environment should cater to the child’s senses.

Infants have a sensitive period for movement. They are born with an innate desire to move and master control of their bodies; it requires no instruction from caregivers. Along with the mind, both fine and gross motor skills develop rapidly from three months to three years. Attention to these needs supports balanced development. Physical activity in the young child is an important part of environmental involvement, and thus education.

An infant’s natural movements are never restricted by placing them in containers such as bouncy seats, swings or walkers. They are never put into a position they cannot get into and out of themselves. Infants roll onto their stomachs when they are ready to be on their stomachs, and infants crawl onto the climber by their initiative alone.

By providing developmentally appropriate movement opportunities and maintaining a safe environment that does not restrict the exploration for the infants in the classroom, motor development is allowed to unfold naturally and at the infants’ own pace.

The focus is on helping the child enjoy independence; each individual must depend on himself or herself for education. Movement and independence are guided by respect for the infant’s competence. The infant is considered to be an initiator, an explorer and self-learner.

Caregivers are sensitive observers – available when direct help is needed, but not intrusive while the infant solves his own problems. A physically safe, cognitively challenging, and emotionally nurturing environment is provided for the infant. The infant is allowed to do what he is ready and willing to do. Instead of placing an object in the hand of a four month old who is learning to reach and grasp, the aware caregiver places a graspable object within reach of the infant, allowing him to initiate, practice and eventually master the skill of reaching and grasping. When an infant drops a toy, the adult waits for the infant to initiate retrieving the toy, instead of getting it and handing it to him. The infant is encouraged and allowed to problem solve and to reach the goal himself, instead of having this opportunity taken away from him by the well-meaning adult. The infants are allowed to do what they are ready and willing to do.

The construction of vocabulary is a part of every aspect of the classroom from snack time to manipulating a toy to group activities. The infant brain is wired to learn multiple languages concurrently and effortlessly. Maria Montessori referred to this as a child having a window of opportunity to easily “absorb” languages from birth though six years of age. To make the most of this fleeting opportunity, the infant hears language spoken by their teachers all day, as well as, being spoken to in sign language. Research tells us that an infant’s brain is wired with the receptors to learn any language and develop those languages if a person is consistently speaking to them. By learning sign language infants have the tools they need to use to express themselves in sign before they are able to express themselves verbally, thus eliminating some frustration felt by the infants.

A well rounded and happy child, whose balanced development and happiness have been supported by responsive individual attention, reacts positively with the environment, copes with frustration, and learns easily. All areas of our curriculum are reinforced by the infant caregivers’ observation and reflection. Caregivers reinforce the infant’s self-initiated activities by paying full attention, while being quietly available. This results in the caregiver appreciating and enjoying what the infants actually do. Occasional reflections made by the caregiver, such as, “You touched the ball and it rolled away,” reassure the child of the adults’ full attention. A joyful smile when the infant solves a problem conveys pleasure in his success. The caregiver says what she sees. Internal guidance is valued in the infant. Gentle validations are used to encourage rather than the use of instructions, criticism and praise. A predictable balance of togetherness and separateness is achieved which benefits both the infants and the adults. Again, giving the infants time, attention, trust and respect is the foundation of the Montessori philosophy. The goal is the “authentic child” – one who feels secure, autonomous and competent.

“Movement is the primary way of engaging the child with his environment. Each child has a mission. If he cannot use his organs of movement then he cannot manifest his mission.” Maria Montessori

“When they are ready, they will do it.”

Schedule a Tour of Our School 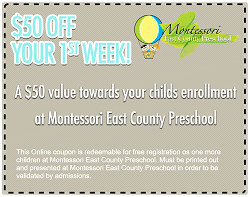 Since I’ve placed my child in this school full-time he’s improved 110%! I would and do recommend this school to anyone and everyone!

I feel after looking at literally 10-15 schools, East County Montessori is the best option for my kids. I am very type “A” and had to truly look at every detail of each program…